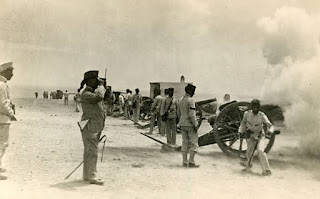 For centuries Spain controlled the mountainous areas from Ceuta to Melilla in northern Morocco. In March 1912 Sultan Mulai Hafid signed a treaty in which he recognized a French protectorate over Morocco.
The French and Spanish then negotiated the Treaty of Fez; Spain would continue to control the mountainous areas of the Rif in the east and the Jibala in the west. France would control the rest of Morocco, and the Rif Mountains would serve as the border between the two protectorates.
When Spain began moving troops into the region, it caused unrest among the peoples of the Rif, who were used to living independently under the rule of the sultan. Two Berbers from the largest tribe in northern Morocco united all the tribes against the Spanish into what became the Rif War of 1917–27.

Muhammad Ibn Abd el-Krim el-Khatabi, also known as Abd el-Krim, became the leader of the revolt. Abd el-Krim was the eldest son of a qadi who received an education superior to that available to most in the Rif.
His younger brother M’hommad became his chief adviser and commander of the Rif army. Abd el-Krim was appointed chief qadi in the Melilla region and quickly became an important figure in the administration of the Spanish zone.
He also was an editor for El Telegrama del Rif, where he took anti-French stances during World War I, for which he was imprisoned in 1917. After being released from prison in 1919, he was reinstated in the Office of Indigenous Troops and Affairs.
Shortly afterward, Abd el Krim left the Spanish administration, and his brother came home from Madrid, where he had been studying to become a mining engineer. They then began to form an intertribal military force with the intention of creating an independent state in the Rif. 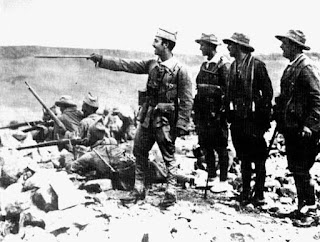 Abd el-Krim and the Rif army won several decisive battles against the Spanish. They used brief military engagements to ambush the Spanish and then retreat. Because of this, the Spanish soldiers were at a large disadvantage. They were trained to engage another European army and not to fight a guerrilla-style war.
Abd el-Krim also took advantage of the region’s steep mountainous terrain and the inaccessibility of the Rifian coastline. General Manuel Sylvestre, the commander of the Spanish forces in the region, was defeated and killed in battle at Annual.
The fighting continued after the Spanish retreat, as the Rifians cut off Spanish escape routes. It was estimated that the Spanish suffered between 9,000 and 15,000 casualties, including General Sylvestre, in this battle.
Shortly after the battle, Abd el-Krim established a government and began making changes in the Rif in an attempt to better the lives of his people. The Rifian army continued to win battle after battle until the majority of northern Morocco was under the control of Abd el-Krim.

Also read: What is left of the monarchy in  Africa

In an attempt to stop him, the Spanish resorted to massive bombing campaigns with TNT and incendiary and chemical bombs, but to no avail. Abd el-Krim and the Rifian army continued to advance. Marshal Louis-Hubert Lyautey, the top administrator of the French zone of Morocco, kept a close eye on the events in the north.
The French authorities had pursued a successful policy of divide-and-rule against the local tribes to keep control, but Abd el-Krim’s influence began to penetrate into the French zone. By April 1925 he launched an offensive into French territory.
For a short time, his attacks forced a French retreat until a joint Spanish-French operation caught Abd el-Krim, now fighting a two-front war, in a pincer attack. By late October 1925, the Spanish were advancing, and Abd el-Krim was forced to retreat toward the French.
In May 1926 Abd el-Krim negotiated a surrender with the French. France pardoned Abd el-Krim and then exiled him to the island of Reunion in the Indian Ocean. In 1947 he was granted asylum in Egypt, where he lived in Cairo until his death in February 1963.
Feel free to leave a comment below!!!