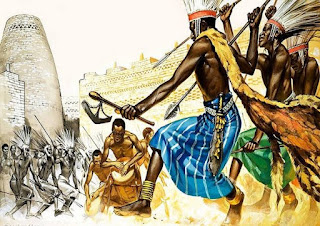 The Akure – Benin war started in 1818. It was a means for the Benin Empire to regain the territory and enforce the payment of tribute. Akure has stopped paying tribute to the Empire and was ready to defend its regained freedom, so it put up a defensive strategy against the Benin Empire.
To acquire the lost territory, the Benin Empire sent out their top war commanders, Ezomo, the Ologbosere, Imaran, Imadiyi, and Oyodo.  With more advance and powerful military, the Benin Armies were able to subdue the Akure revolt. After a successful campaign, the two generals, Ezomo and Ologbosere, died on their way to Benin. It is believed that they died in active service. The successes in the war can also be credited to mercenaries from Ikeres in Eastern Yorubaland and Irrua- Esan chiefdom.

Also read: History of Africa before 1879

As the troop of the Benin Empire began to pull out of Akure, some soldiers were let under the command of Imadiyi and Oyodo. The two front commanders that were left there established a military base at Otun for continuation for further military advance. The Benin Empire also had plans to continue its advancement to the Ekiti region and other Eastern Yorubaland.

Drop your comments below!!!