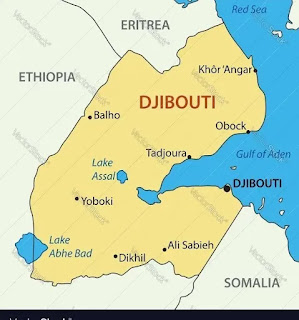 The Republic of Djibouti is one of the five Africa countries that are located in the horn of Africa in East Africa, it is a multi-ethnic country with at least more than 921,804 people. It was colonized by the French and share a border with the Gulf of Aden and the Red Sea to the East, Eritrea to the North, Ethiopia in the South and West, and Somalia in the Southeast.
Aside what you may have heard about Djibouti, here are the 10 Interesting facts about Djibouti you may not know:
1.      It is the eighth the smallest country in the whole of Africa and ranks third in mainland Africa with it landmass of 23.200 km2.
2.      It is home to the foreign military base in Africa, due to its strategic location in the African continent, United State, France, Italy, even Japan, and China also have military bases in the country.
3.      It was formerly known as French Somaliland from 1896-1967 and French Territory of the Afars and Issas from 1967 – 1977, on 27 June when independence was achieved from France they took the State of Djibouti as its official name.
4.      Djibouti is primarily inhabited by the Somali and Afar people with the Somali being the majority.
5.      The Lake Assal in Djibouti is one of the saltiest lakes in the world, even saltier than the Dead Sea.

6.      The official language of the people is French and Arabic but other indigenous languages are widely spoken among the natives like Afar and Somali.
7.      It also serves as an important pathway from North America and Europe to the Indian Ocean through the Suez Canal.
8.      Djibouti City is the name of the capital city and it has a port that serves landlocked Ethiopia.
9.      The country has only won one medal in the Olympics, which happened in 1988 and it was won by Hussein Ahmed Salah.
10.  Around 90% of Djibouti’s land is a desert making it difficult for Agriculture in the area.
Tell us what we miss below in the comment box

2 thoughts on “10 interesting facts about Djibouti”