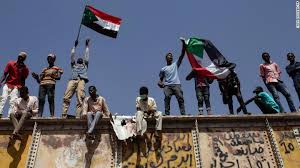 Sudan’s military rulers and protest leaders on Saturday are scheduled to sign a landmark deal reached after a bloody uprising which is meant to pave the way for civilian rule.
The ceremony will make official a constitutional declaration inked on August 4 between the country’s Transitional Military Council and the opposition coalition of the Alliance for Freedom and Change.
The deal brought an end to nearly eight months of upheaval that saw masses mobilise against president Omar al-Bashir, who was ousted in April after 30 years in power.

The deal brokered by the African Union and Ethiopia was welcomed with relief by both sides, with protesters celebrating what they saw as the victory of their “revolution” and generals taking credit for averting civil war.
While the compromise meets several of the protest camp’s key demands, its terms leave the military with ample powers and its future civilian government with daunting challenges.
With Saturday’s official signing of the transitional documents, Sudan will kick off a process that will include important immediate first steps.

The composition of the new transitional civilian-majority ruling council is to be announced Sunday, followed two days later by the naming of a prime minister.
On Thursday, protest leaders agreed to nominate former senior UN official Abdalla Hamdok as prime minister.
The veteran economist, who stepped down last year as deputy executive secretary of the UN’s Economic Commission for Africa, is to be formally selected on August 20, a statement said.
The cabinet is to be unveiled on August 28, with the newly-appointed ministers due to meet the sovereign council on September 1 for the first time.
Elections must be held after the 39-month transitional period that began on August 4.